It might be that pushing our athletic abilities and finding new “hobbies” is our family’s way of dealing with
health crises. But the truth is, I think it is the only way we as the outsiders, the caregivers, and supporters can
feel a little less helpless. We are not doctors or scientists, so we can’t directly participate in the fight against
these horrific diseases. Instead we rally the best we can to do our part. Roughly twenty-five years ago when I
was diagnosed with cancer, my parents both joined up with our local Team in Training group to run marathons
with the Leukemia and Lymphoma Society. But now the roles have been reversed, and a new enemy,
Parkinson’s disease, has affected our family.

About six years ago my Dad, Cliff Hall, was diagnosed with Parkinson’s Disease. The past few years have brought
on new challenges and struggles. As you all know well, everyone’s fight and experience is different when it
comes to Parkinson’s; the symptoms are not the same across the board, and some days the medication doesn’t
work like it did yesterday. As there is no known cure for Parkinson’s Disease, he has tried many different
medications and trials (some funded/sponsored by the MJFF) to find the program and routine that works best
for him. It is a challenge every day and a battle that is not only hard for him, but difficult for the whole family.

This past December my Dad underwent the first of three Deep Brain Stimulation surgeries, completing the series
in early February. It was an incredibly difficult and painful time; but he had a tremendous team of doctors at Mt.
Sinai Hospital in New York, and an unmatchable circle of friends who drove us to and from the city for the
procedures. Words cannot truly express my gratitude for all those that were there for us and guided my family
and I through that time. Since the DBS devices have been activated, he has been able to see some
improvements with his symptoms, and hopefully will see even more as adjustments continue to be made.

Seeing my Dad go through such hardship is heartbreaking every day. He is my rock. I am empowered by him to
join the New England Parkinson’s Ride, to help raise money and awareness for the Michael J Fox Foundation for
Parkinson’s Research.

I found out about the New England Parkinson’s Ride, right before the 2018 ride. It was too late to join, so I was
determined to sign up as soon as registration opened for the following year. I told my family I was going to
participate in the 50 mile ride, and to my great delight they all decided to join me as well, thus team Hall’n Ass
was formed. Most of us were not cyclists, “but hey, its lovely scenic bike ride along the beautiful Maine Coast,
how bad can it be?” The time we spent training together was the highlight of the summer! (Well, except for the
flat tires, broken spokes, broken ribs, broken helmets, contusions, concussions, a strained Achilles, and many
sore a$$es.) Our team last year consisted of seven in-person riders (5 rode in the 50 mile and the other two guys
participated in the 100 mile ride), as well as members of our team supporting us and participating virtually as
well. My brother and his wife organized a workout of the day at their CrossFit gym in Tampa, FL to raise money
for our ride the day of the event in solidarity with us. In addition, my wonderful friend, Alessandra, and one of
her coaches at their CrossFit gym in North Andover, MA rode virtually with our team on the day of, doing 50
miles on the Assault bike. Her fellow coach, Greg, is a firefighter and rode the 50 miles in full firefighter gear. It is
truly special to be able to ride alongside my family and friends, and it brings so much joy to my heart to see our
team grow this year!

This year, thanks to Covid-19, we have begun our training at a distance, all riding on our bikes propped up on
our trainers in our living rooms, basements, and balconies. We have been practicing our Cycling in Sync, and
challenging each other to go further, but so missing the company of each other (and even a hill or two!) Though
we are so sad that all our teams cannot be together to ride through beautiful Old Orchard Beach, Team Hall’n
Ass will be riding in Sync in Albany, NY. Parkinson’s Disease doesn’t take a day, a week, or even a moment off, so
we will not be taking this year off from riding to raise awareness and bring support to the Michael J Fox
Foundation.

In early March, our team held a two-day silk scarf marbling fundraiser with all proceeds going to the New
England Parkinson’s Ride. Each participant created a one-of-a-kind 14” x 72” hand-dyed silk scarf. We raised
$3,500 through our event, and through the generosity of General Electric’s matching program, we were able to
double that! We created a couple dozen additional scarves that are still for sale
here… https://www.facebook.com/events/559053531444625/ All available scarves can be seen in the
discussion section of this event. These scarves are 14 x 72″ and were hand dyed and created by members of our
team. If you are interested in one of the scarves, please send me a message with the number of the scarf you
are interested in. They are $45 each and if you need it mailed to you, it is an additional $5 for shipping. We will
be accepting payment directly to our team site https://fundraise.michaeljfox.org/new-england-parkinsons-ride2020/HallnAss and by Venmo for the shipping payment.

The work that the New England Parkinson’s Ride has done is incredible, and I am so thrilled to have become a
part of it! 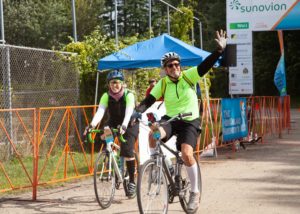