Hi my name is John Kycia, I’m an identical twin. My twin brother, Ed was diagnosed with PD over 25 years ago when he was in his early 30s. Ed first noticed that his handwriting was getting smaller and more difficult to read. The first thought was either Lyme Disease or a pinched nerve, possibly in his shoulder or elbow. After a visit to Ed’s general practitioner it was decided that he should see a neurologist for a more formal work up and diagnosis. The neurologist had Ed go through a standard battery of physical tests and made a “clinical” diagnosis that Ed had Parkinson’s Disease. Ed and I then went to Yale for brain scans to have our brains compared and contrasted. It was there in the cold hallway of Yale’s neurology department that the doctor confirmed Ed had Parkinson’s Disease. This was about the same time that Michael J. Fox was diagnosed. PD was no longer an “old person” disease.

For the following 10 years Ed handled his disease very well with little outward signs that anything was wrong. He and Mary had 2 young children who saw their Dad as normal not knowing what was going on inside his now diseased brain. However PD began to show its ugly side and Ed began to decline physically. After further meetings with his specialists at Mass General, DBS (Deep Brain Stimulation Surgery) was presented as a viable option, as Ed qualified for the risky procedure. Not having any choice Ed opted to have the surgery with hopes that it would give him time to hold out for a true cure, it was a “bandaid” but it was something.

The DBS worked, it actually work well for about the next 10 years. As time passed the symptoms of PD continued to present and progress. Ed began to fall more often, his speech began to decline. Never once did he complain or ask why me? Ed and PD now became one.

I first learned about the New England Parkinson’s Ride back in late 2009 after its 2nd year. Our good friend Jay Martin had first learned about the ride from a Woods family member and suggested that we pull together a team and ride for Ed. Another good buddy, Kevin Ball joined along with several other folks from CT and we rode the original 30 mile “hill” course in 2010 raising around $2400. Team Kycia was born. My wife Diana joined us a few years later bringing along her positive attitude and sunny sense of humor. Ed, Mary and their kids Danny and Maggie joined the team in 2016 along with Mary’s sister Anne and her husband John. As the years progressed so has Team Kycia.

In 2017 we had the honor and pleasure of picking up another very valuable teammate by the name of Tim O’Brien. Tim was diagnosed with PD several years earlier and was looking to get involved in the PD community. Tim, his wife Linda and their daughter Sarah all jumped in and helped propel Team Kycia to another level in fund raising. A meeting was called by the “original 3” (Kevin, Jay and myself) to discuss recognizing Tim O’Brien as he, along with Ed were our true heroes. The decision was made to change the name of our team from Team Kycia to “Team KO”. Team KO not only stands for “Kycia-O’Brien” BUT also for “Knock-Out” as it’s our goal to knock out Parkinson’s Disease in Ed and Tim’s lifetime. As of the end of the 2019 ride Team Kycia/Team KO has raise well over $170,000 for research and we won’t stop until Ed, Tim and the millions of folks suffering from PD have a cure in hand!

I have lived a blessed life, but watching my identical twin brother suffer brings me much “survivors guilt”…why have I been spared, why did Ed draw the short stick? I can’t give Ed a kidney, my blood or a lung BUT I can help by raising money and awareness for a cure.  So I will continue on my quest until I can’t….PD has humbled me and made me see how valuable life is. I’ve been spared so it’s my job to fight for those who can’t. Do I wish our team could ride together in Old Orchard Beach, as we have for the past decade…of course I do. But OOB is just a place. The Ride is in our hearts and Team KO will most definitely be Cycling In Sync on September 12th. I hope that you will too!

God bless and don’t let this downtime in our world stop you from focusing on fund raising for a cure. Give your donors the opportunity to say no, my guess is that they will continue to give! 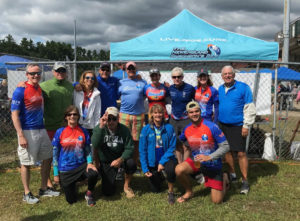