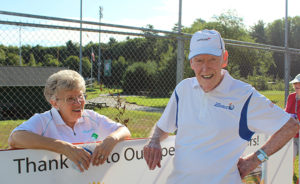 It is with a very heavy heart that we share the passing of Colonel Bob Woods, the co-founder, Father of the Ride, Edna’s right hand man, and our official Ride Starter.  Bob, also known as “Coach” to many because of his years as a baseball coach to hundreds of youth in Merrimack, NH, passed away unexpectedly on December 2nd. He was surrounded by his loving family, including Edna, his wife of 62 years, his 7 children and their spouses as well as several of the 18 grandchildren who adored him.

Bob and Edna started the New England Parkinson’s Ride in 2008 when their youngest son, Chris, was diagnosed with Young Onset Parkinson’s Disease at the age of 41. In the past 10 years with his guidance and oversight (he was the Colonel after all) the ride has grown from 35 cyclists to over 1000 and has raised over $3.2 million for The Michael J Fox Foundation.  Bob started in 2008 planning and marking all routes, helping to secure rest stops, hauling water and supplies, and basically anything else requested of his beloved wife. For the entire 10 years he has been our official Ride Starter, lovingly sending each and every cyclist on their way, making them promise to return safe and happy.

His greatest joy was his family and even though he was a proud career Army Officer, there was nothing that made him more proud than the accomplishments of his wife as the Executive Director of the New England Parkinson’s Ride. There was nothing that meant more to him than finding a cure for his son and all of those he came to love as part of his ride family.

In lieu of flowers, please consider a donation to the New England Parkinson’s Ride. You may do so here (just type in “Team Woods” under Donate to a Team) or by mailing a check to the New England Parkinson’s Ride, PO Box 1124, Merrimack, NH 03054. 100% of all funds donated will go directly to The Michael J Fox Foundation specifically for research that will lead us to the cure.

Funeral Service: Thursday, Dec 7th, 9:30 am with refreshments to follow at Our Lady of Mercy Church, Merrimack.

A burial with full military honors will then be held at 1:30 at New Hampshire State Veteran’s Cemetery in Boscawen, NH. All are invited to attend.